So I created a giant underwater world...

A place to talk about the simulation: dicuss how it works and what it does, and share what you've discovered.
Post Reply
8 posts • Page 1 of 1

So I created a giant underwater world...

Imagine a place that's expansive, plenty of food, and a comfortable temperature. Also, it's completely underwater. That's the idea I had when I created Tlaloc, a world named after none other than the Aztec god of rain. Tlaloc, as you might have guessed, is a world completely submerged in water. I set the slope-gradient low to convert an entire map into seas and shelves, the plant fertility was beefed up (I've had problems with starvation in my past attempts to create an ocean world), and I increased the size to 2, to get an authentic open-ocean experience. The starting species was, of course, the aquatic variant of the blank-slate, and there were 500 to start. Everything else was set to default (except automatic population control was off. Trust me, I have no problem keeping the population "controlled" whether I'm actually trying to or not). I sped it up to 10x. Within seconds, they all almost died but the population bounced back to about 250 by the time they were down to 30. I kept it going until the in-game timer reached almost an hour (which is only a few minutes on 10x, obviously), and I took a look at some of the underwater sausages and how they developed. By now the population was about 850 (creature cap is about 1200. My PC runs pretty well)

There were about three varieties (all of the original species. There were about 4 species but their populations are so low that they're not worth talking about justyet), one in the northeast corner, one in the center, and one in the southwest. I've taken screencaps of all three.

The first type, who lived in the center, was blue like the original, and developed flippers and tails (all three types did). Some had four flippers while others had just two. They had different facial features, but the standard model had a pair of eyes (or maybe very small horns) and a nice, defined head. 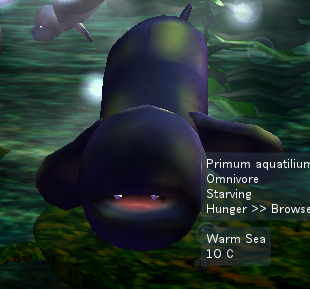 Woah, are his eyes in his mouth? Or are those teeth? You know, I think there's actual deep sea fish with eyes in their mouths. 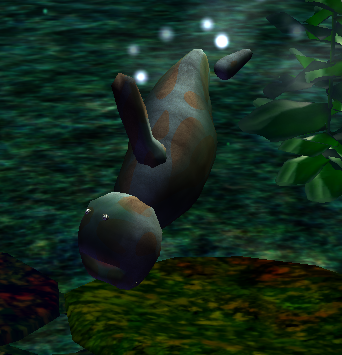 This is a more regular type. As you can see, his eyes are not in his mouth. I think they look sort of like muppets. Therefore, I dub them Sea Muppets. 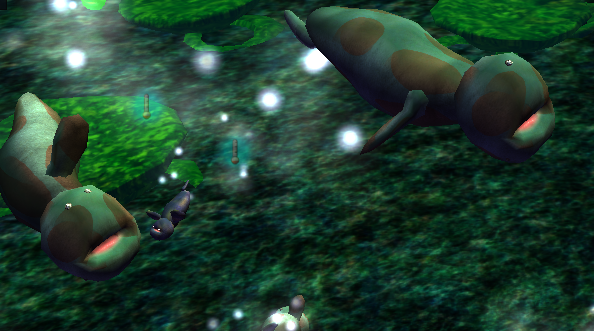 And here's a school of muppets.

The next type were in the northeast, and were pink. They deviated little from the original blank slate in terms of head-shape. I called them Pink Cucumbers (that's not supposed a euphemism for anything). 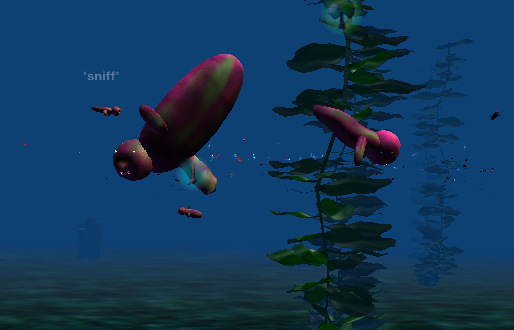 Here you can see that they have a little more facial features too. 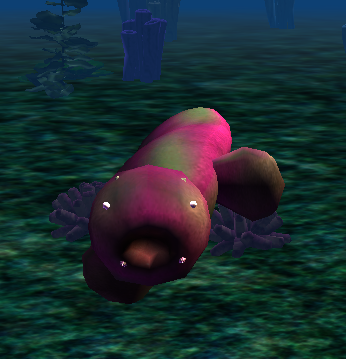 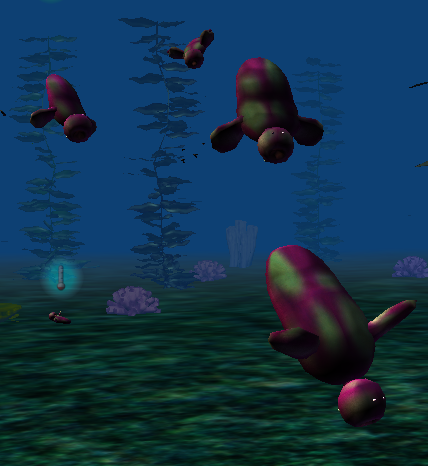 A few more cucumbers. I think their paddle-shaped limbs are fascinating.

The third type lived in the south. They were purple and had funny-shaped heads, so I called them Strangeheads. 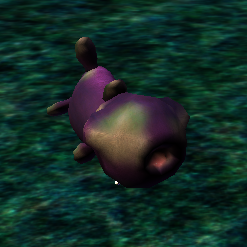 A baby Strangehead. You can kind of see his facial features at the bottom. 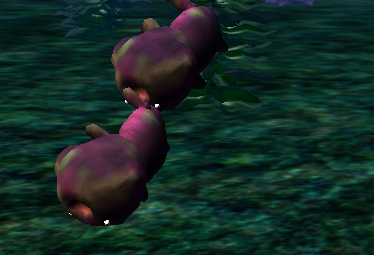 A couple more Strangeheads, and here you can see their faces better. I should note that on overage they were smaller than the other two types.

This post is getting kind of long but if you guys like what I'm doing here I can keep y'all updated on the latest twists and turns of Tlaloc!
Top

Nice! I'm definitely interested! I once had an island world where there were a couple shark like beings. Shame I didn't capture them. The land creatures also acted a lot like locusts. They would boom in population, eat all the food, then die off again. It seems that some took to the sea in desperation for food, and they ended up staying there.

"And fear struck the hearts of the dodos, as they realized they were being watched..."
Top

Can you show us the sattelite map and clade diagram

But thats a swa-

Shut up! This is the closest thing I could find.

Unfortunately, I don't really take pictures of my games. I should start doing that.
"And fear struck the hearts of the dodos, as they realized they were being watched..."
Top

Next update is coming soon, there's a lot more to cover since I last posted. Until then, here's the satellite map. 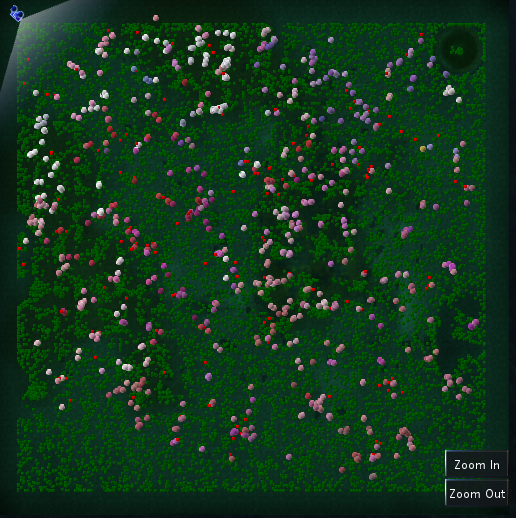 And the clade diagram (most of what's visible on it, at least) 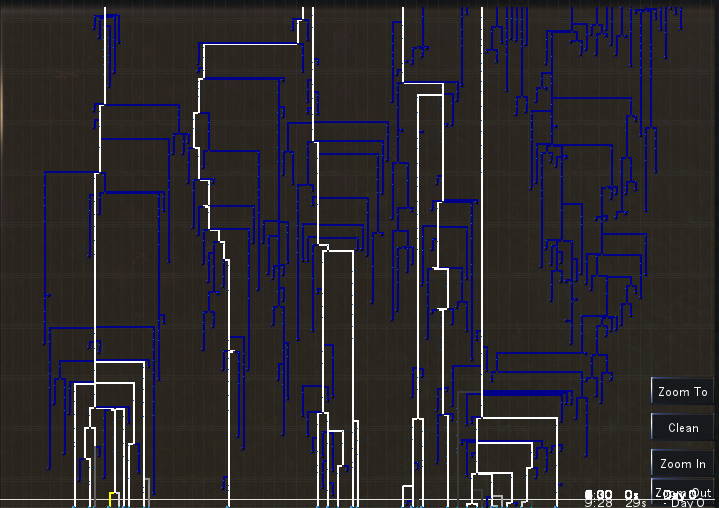 These are both from about nine-and-a-half hours of in-game time.
Top

These next screencaps come from around 3-5 hours into the evolution cycle. By now the biodiversity is similar to what you'd might expect in a sampling of a real ocean. Notably, most of the creatures now are herbivores instead of ominvores, but a few omnivorous species with populations ranging in the thirties remained. 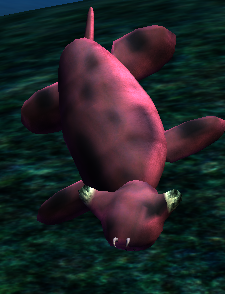 These strange fellows descended from the Strangeheads and have a tiny pair of teeth/horns on their face as well as a more noticeable pair of horns on their crown. 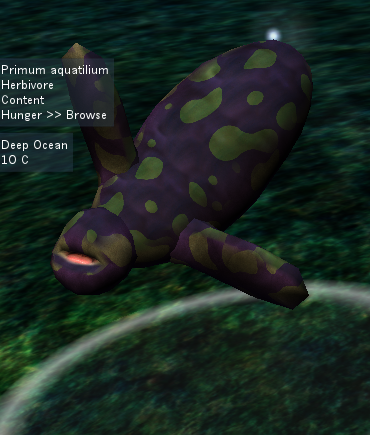 The most direct descendants of the original species. The only major changes are a pair of flippers and increased size, as well as a different head-shape. 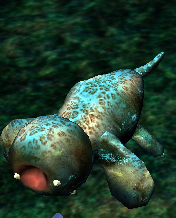 One of the most successful of the remaining omnivorous population. They had a population of around 75.

These were around all the screencaps I took of this era. The next post will deal with the 6-10 hour mark. Very interesting developments in this era.
Top

Try to lower the fertility. It will encourage the omnivores to hunt and will make a nice extinction event.
Your everyday cube of molten rock. Also, look, a baby dragon.

But thats a swa-

Shut up! This is the closest thing I could find.

I would recommend a longer term sim. I.E. set it to 10x speed overnight. If it doesn't crash that'll get you over ingame 3 days in 8 hours.
Top
Post Reply
8 posts • Page 1 of 1

Users browsing this forum: No registered users and 1 guest